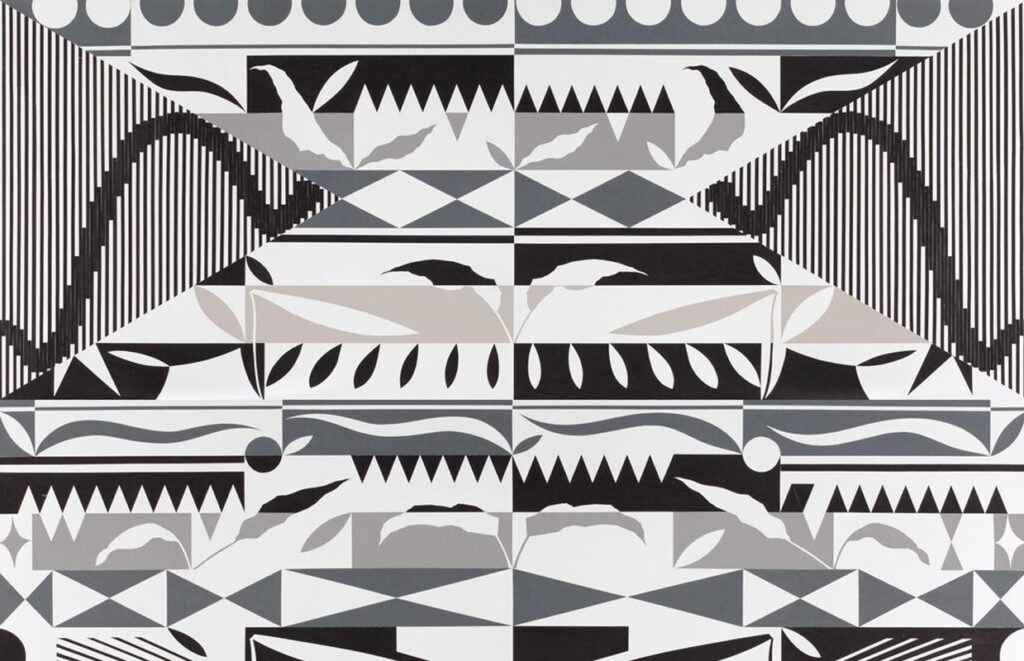 “Sobota’s multilayered painting (or collage), viewed in and of itself, is more than enough to provide possibilities for new and fresh interpretations, despite it being almost entirely devoid of any kind of symbolism or reference outside the medium itself. Yes, almost entirely, because this exhibition, Palindrome: Paintings and Objects, is a kind of intentional exception to the general rule. The selection of works at U10 Art Space is made up of triptychs, diptychs, with the addition of objects (each accompanied by its own pedestal).
They are united by two common traits – the motif of a vase, which acts as a faint formal feature more or less recognisable in all compositions (both the two-dimensional and the three-dimensional ones; the objects are basically two-sided planes whose minimal depth creates the unavoidable third dimension), and the productive process that shapes the compositions and that lends its name to the whole series. […] The word “palindrome” should not be understood as a literal descriptor of the author’s compositions: they are obviously not the same when observed from up to down or from left to right (or the other way around). One should instead focus on the processes of reversal, variation, transposition, or displacement of chosen formal elements, which are sometimes completely abstract and geometric, and sometimes look like floral motifs found in nature or, less often, like motifs found in man-made environments built by human hands and machines.”

from the text by Bojan Krištofić

Damir Sobota (1988, Zagreb) graduated from the Academy of Fine Arts in Zagreb, Croatia. He has participated in numerous independent and group exhibitions, among which are: 31st Youth Salon (2012), Biennials of Painting (2013, 2015, 2017, 2019), HT Award@MSU 11 (2018) and The Radoslav Putar Award (2020). He participated in residential programs in Belgium, Germany, and New York in 2015, 2018, 2019 and 2021. He worked as an Expert Associate at the Chair of Art History and Graphic Design of the Faculty of Graphic Arts in Zagreb.
He participated in the scientific-expert conference “Estetization and Re-humanization of Public Property, art as therapy, painting at KBC Rebro”, Zagreb, 2017. He is the winner of The Young Artist Award (2017) and The Radoslav Putar Award (2020). He is a member of the Croatian Association of Visual Artists (HDLU) and The Croatian Freelance Artists Association (HZSU).
He lives and works in Zagreb.

U10 Art Space is an independent artist-run space dedicated to supporting contemporary art founded in 2012 in Belgrade. It was founded with the purpose to be a platform where young local artists would be shown. By collaborating with similar spaces and initiatives, U10 Art Space actively works on creating a culture of artistic education, debate and exchange between artists, curators, art theoreticians, writers and the wider public. The main focus of the program is to create solo and group shows presenting mainly young artists from Serbia.
A few slots per year are dedicated to international projects whose concept is aimed at creating active exchange and collaborating with local artists; followed by presenting mid-career artists. An integral part of the program includes events such as: exhibition guidings by artists and curators, performances, sound and music performances, discussions and panels as well as parallel events outside of the space itself and abroad.