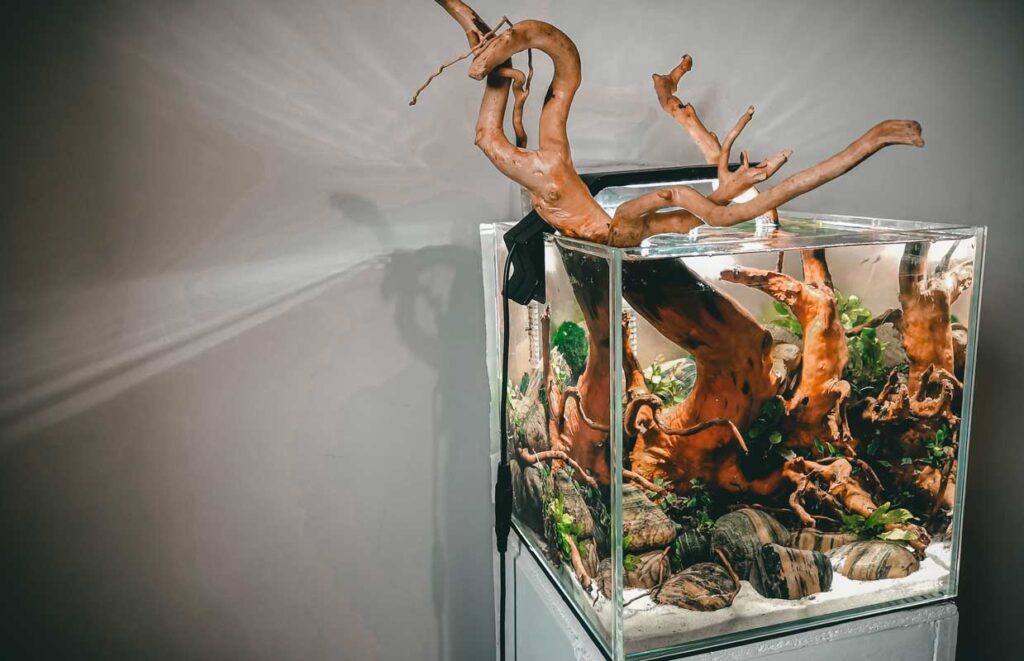 The piece titled “The tree of life” is a live installation in the form of an aquarium, created for the purposes of Art Weekend Belgrade which will take place at the Hotel Belgrade in October 2021. Hotel “Belgrade”, once a renowned Belgrade hotel, is currently in very poor condition, it is ruined, and the old splendour that adorned it has been replaced by dust and cracks on the walls. If we contemplate an imaginary Tree of life abstractly and philosophically, we notice that it has long been in a similar situation as the mentioned hotel.
Considering our planet as the imaginary Tree of Life, it is clear why it’s being compared to the hotel which is itself in a very bad condition. Nevertheless, despite its bare and cracked walls, the hotel gains a new radiance in this constellation as an exhibition space.

Thus, the tree itself, from which the composition in the aquarium is made, is in a similar condition. It is stripped and brought to its “death”. Just as the hotel was given the chance to shine again in its full splendour through another form, the tree in the aquarium is surrounded by living plants and has the same imaginary potential to come to life again and to be in full bloom.
In a figurative sense, the situation is similar to our biodiversity. It has potential, but it also exclusively depends on us whether it will be realized or not. The very aesthetic contrast between the “ideal living landscape” recreated in the form of an aquarium diorama and an utterly demolished space was very captivating to me as an author: to give new life to an abandoned and forgotten space with my living diorama and in that way contribute to this manifestation.

“The works of a person that builds, begin immediately to decay; while those of him who plants begin directly to improve ” William Shenstone

Filip Stefanovic is a visual artist and gardener from Belgrade, was born in 1994 . He enrolled at the Faculty of Fine Arts in Belgrade in 2013, Department of Printmaking. In 2017, he completed his bachelor academic studies, and in 2018, he completed M A studies. He is enrolling in PHD in 2018, in Belgrade at the same faculty, at the printmaking department.
In addition to traditional printmaking techniques, for the last five years he has been actively involved in creating natural layouts, terrarium ecosystems and aquascaping, which have become, among other things, the main medium of personal expression. Since 2014, he has been regularly exhibited in Serbia and abroad. He has exhibited in many group exhibitions.