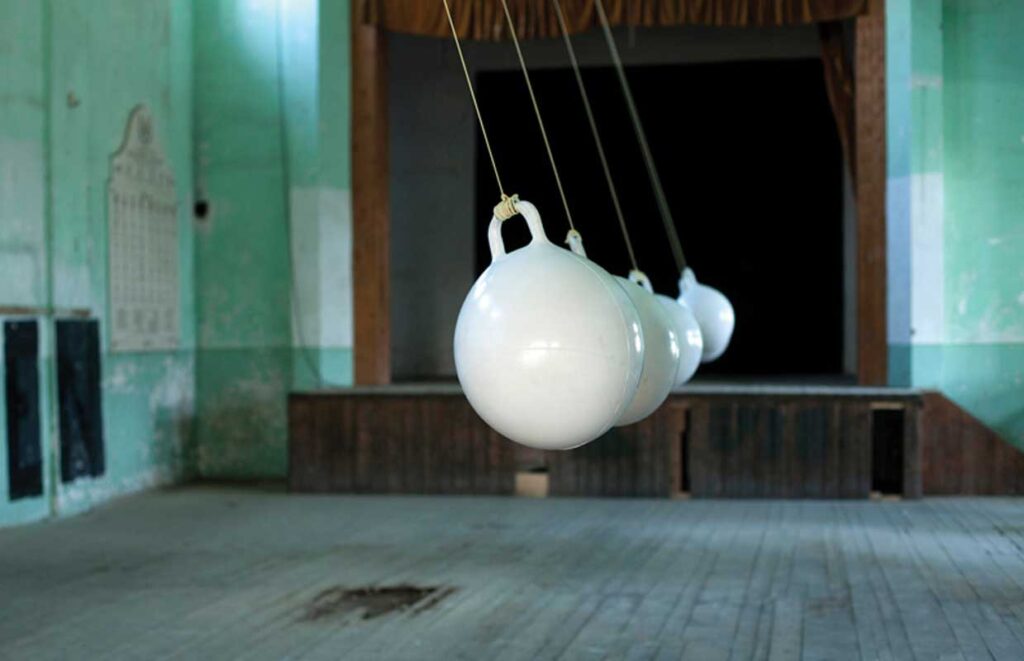 I came to Jalovik for the first time in 2011 to visit some friends who participated that year in a art colony-meeting. Then I noticed the big room of the abandoned cinema.
The huge room serves as a pigeon house while waiting to go rack and ruine; children sometimes play football in it. When I was invited the next year to participate myself in the work of the colony I wanted to make a work for this room, its dimensions and generally its forgotten function which is repressed in its memory.

This is a scene-performative work, video-documented, but it works at the same time with the space in a sculptural way. I overcome the dimensions of the whole space by building the rhythmics of movement through simple motions of pendulums. When the rhythm is established, the pendulums seem to create some inaudible music and the space starts to breathe.
In the moment of culmination, water starts to fall from the ceiling and a water-wall is formed along one whole length of the room. The light which passes through this water-wall creates a rainbow. At that moment the rhythmic is perturbed and the whole composition starts to disappear in the chaotic movement and collision of the pendulums.

In this work I used the experience which I gained working in the theatre “Španski borci“ in Ljubljana as a technician for light and scenography.
In this installation I used scene elements from several performances in which I had participated.

Veljko Zejak (1980) graduated in 2005 at the sculptural department at the Faculty of Fine Arts in Belgrade, where he also completed postgraduate studies in the class of prof. Mrdjan Bajic. 2008/ 2009 he went to Paris as a French government scholar, where he continued his education like a visiting student at the Ecole national supérieure des beaux-arts de Paris in the studio of prof. Richard Deacon. Since 2008 Zejak participates in several art residencies: Dusseldorf , Paris , Neumünster, (Germany) , Chungchun (China).
He exhibited at 16 solo and over 50 group shows internationally. Zejak participated in international art fairs in Stockholm, Paris, London, and his works are in private and public collections of contemporary art. He lives and works in Ljubljana, representing Art association Hibrid, where he work on art, educational and socially engaged projects.