Gallery RIMA | Vladimir Velickovic in the 1960s | A Crucial Decade

Gallery RIMA | Vladimir Velickovic in the 1960s | A Crucial Decade 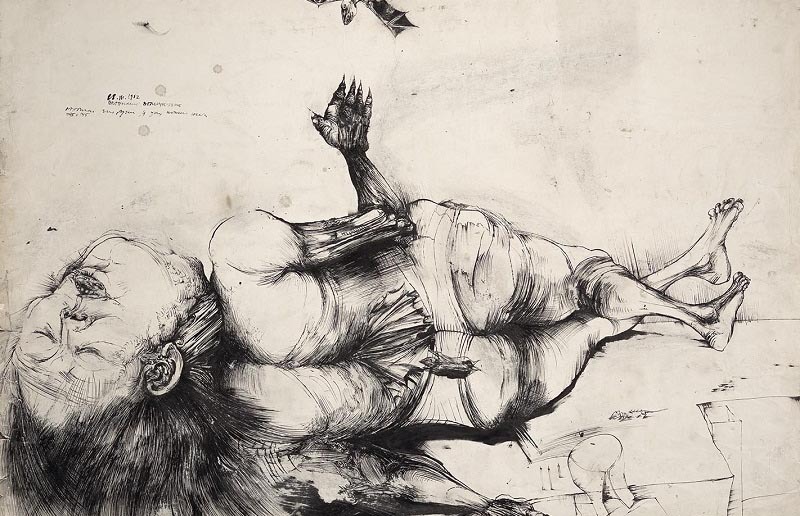 The selection of drawings at the fifth exhibition of Veličković’s works in Gallery RIMA is concentrated around a group of works produced between 1960 and 1971, as a reminder of this pivotal decade for the artist, primarily his representative works such as The Railway Man and The Drowned Man, analogous to his paintings of the same title; there is also his Composition produced in the Master Workshop of Krsto Hegedušić, his Bat, exhibited at the Biennial in Paris¸ as well as his Ripped Up Flower and Figure from the Biennial in Sao Paulo.

The 1960s represented the pivotal decade in the creative activity of Vladimir Veličković when the artist produced a corps of paintings and drawings whose value was recognised and acknowledged at the most important exhibitions of Belgrade and Yugoslav art, including the October Salon (Belgrade, 1963) and the Triennial of Fine Arts (Belgrade, 1964), as well as Yugoslav exhibitions at the Biennial in Sao Paulo (1963), San Marino (1965) and Paris (1965). The award for painting at the Paris Biennial brought him a grant for a sojourn in Paris – the result of this was his decision in 1966 to move to France, work and develop in the framework of primarily Parisian but also international art scene. Behind all the public recognitions, in the privacy of artist’s studio, the sixties were marked by pivotal changes inside Veličković’s paintings and his referential leap from the local context of neo-surrealism into the then contemporary international discourse of new figuration.

Veličković’s painting from the last years of the fifties and the first years of the 1960s, the period when he exhibited with the Mediala group (1959, 1960), was marked by the scenes of secrecy and nightmarish atmosphere of dark Cellars and Dungeons, by portraits suggesting internal worlds of madness and trauma, or representations of figures and landscapes culminating in his monumental Scarecrows. Until the second half of the 1960s, Veličković’s works were analysed in Belgrade within the discourse of a reformed surrealist model of painting.
The early interpreters of Veličković’s works found sources for his iconography in a specific choice of historic paragons – from Dürer to Goya, from El Greco to “the blue” Picasso, as well as in his childhood memories of disturbing scenes from the Second World War. Classification of his painting as neo-surrealist lasted in local criticism even after 1963. However, it was then that the first significant changes in Veličković’s model of painting took place.

Founded in 2008 Gallery RIMA is presently one of the most active and prestigious private galleries in Serbia. It realises its exhibition and accompanying programmes in two gallery locations and in two cities – Belgrade and Kragujevac. Gallery RIMA has been focused on twentieth and twenty–first art and artists from Serbia and the broader region of former Yugoslav republics.
There is an equal representation of established artists from the past and contemporary authors still active on the local and international art scenes.

When dealing with the historically affirmed artists Gallery RIMA insists in its exhibition and publication projects on new discoveries, on curatorial interpretations and theoretic “readings”; at the same time it offers professional framework, support and visibility to the artists from various generations. During the ten years of its activities, Gallery RIMA has organised over fifty exhibitions in its own exhibition spaces and several exhibition projects in cooperation with public institutions. Owing to the high standards and professional business procedure Gallery RIMA has accomplished a continuous cooperation with the most eminent artists from the Balkans, with the most respectful names in the area of theory and art history, as well as the most important cultural institutions in Serbia. The Gallery promotes art not only through its exhibitions but also by means of its prolific publishing activity. The recognisable publications and elegant and elaborate monograph studiesare precious contribution to the research and interpretation of the twentieth and twenty-first century art.