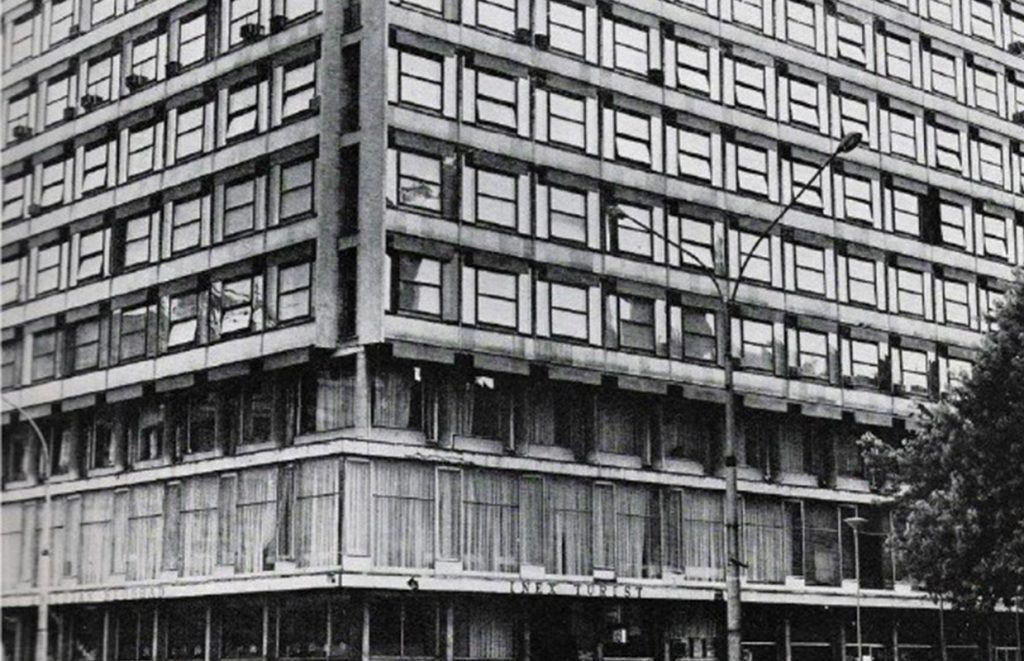 Milica Ružičić, multimedia artist and trade union activist, is the most consistent in her creative opus about the world we live in. In the new cycle of paintings and objects, she deals with socially engaged topics related to the human rights of citizens, private property, corruption and crime in society, and the repression of authoritarian rule.

Milica Ružičić (Belgrade, 1979) In 2019 she acquired the title of Professor of Vocational Studies in the field of art at the College of Fine and Applied Arts (VŠLPU); in summer 2018, became the President of the ULUS Sculpture Section Board; in 2016 defended her doctoral art project on the topic “Interactive installation in public space Dolap – Critical potential of art” and acquired the title of Doctor of Arts – Fine Arts at the Faculty of Fine Arts in Belgrade, mentor Radoš Antonijević; in 2008 received her master’s degree and in 2005 graduated from the same faculty, at the Sculpture Department under Professor Mrđan Bajić. Since 2013, she has been the president of the only representative trade union in VŠLPU and since 2009, she has been teaching sculpture at the College of Fine and Applied Arts in Belgrade; a member of ULUS since 2008.

In the 20th jubilee season of the Artget Gallery, in which the artistic directors of the Gallery in the previous decade re-map the domestic scene with one selected exhibition, Ivana Tomanović presents Mitar Simikić with a delicate documentary story Ugljevik.

The very name – Ugljevik (derived from the Serbian word for coal) bears a clear definition of a town next to a mine. Envisaged as a “perfect place”, where everyone would have the same home, same job, same standard of living, i.e., all would be equally happy and prosperous. The communist idealism and socialist practice. For a while, it seemed to work well; everything seemed possible. But reality always appears suddenly and without announcement, ready to destroy what has been seemingly solidly built. Everything is clearly shown in Mitar Simikić’s photographs; all is “readable”, understandable and highly precise. The square format additionally strengthens the visual form and gives stability to the composition. The focus is always on one, main, element, usually placed in the centre.

Mitar Simikić (1986) is a documentary photographer. He finds inspiration in the unknown and the feeling of possibility that is created within it and has an interest in photo stories in the form of series and long-term projects, a reality photography that examines social values. Simikić’s photographs express emotions and perceive people, the environment and situations in a personal way. He works spontaneously and intuitively – adapting to changes in light, atmosphere and circumstances; animated by unplanned, temporary encounters with people and places in their state at that very moment. His goal is to create a space in which the audience can feel empathy for his subjects and get involved in their stories. A couple of seemingly contradictory motives are at the heart of his practice: a desire for order and simplicity and a fascination with the small details of the subject. Simikić is often entirely preoccupied with the stories he records. Mitar Simikić completed his undergraduate studies at the Academy of Arts in Bijeljina, Graphic Design Department (Bosnia and Herzegovina) and master studies at the Academy of Arts in Novi Sad, Photography Department. He has participated in several documentary photography workshops, including Civic Engagement Workshop, BOLD Academy (2020); VII Agency, Sarajevo Academy seminar for Narrative and Documentary Practice (2019–2020); Noor-Nikon Masterclass in Belgrade (2015); Focusing Democracy – Documentary Photography, Youth Centre CK13, Novi Sad (2013). He has won several awards, and his documentary stories have been shown at numerous exhibitions in this region.

Mis(s)placed Women? is an ongoing collaborative art project started in 2009, consisting of performances and performance art workshops, including contributions by over 160 individuals.
Many of them are artists, mainly identifying themselves as women from diverse backgrounds. Within this project, we embody and enact some of everyday-life’s activities that thematize displacement, known to migrants, refugees, and the itinerant artists traveling the world to earn their living. Those performances deal with migration issues, power relations and vulnerability, particularly concerning the female and transgender bodies, an aspect that figured prominently in my art practice. With this project, on one side, we are investigating privilege by making a distinction between working mobility, forced or desired migration, and how arbitrary laws may apply, and on the other side, exploring diverse public spaces and the invisibility of certain groups within them. (T. Ostojić)

Tanja Ostojić is exhibiting photos, stories, videos, sound, drawings, signs and performance scores from the very rich MIS(S)PLACED WOMEN? participatory art project archives in the form of a multimedia installation, including works from the collection of the MSUV, Museum of Contemporary Art Vojvodina in two exhibition venues, live interventions in the public spaces in Belgrade and community gathering that will be presented at CZKD. Tanja Ostojić (born 1972 in Yugoslavia) is an interdisciplinary and performance artist from Belgrade who has lived and worked in Berlin since 2003. She is internationally known as a pioneer of institutional gender critique and for her work in the field of socially and politically engaged feminist art and art in public space. Her artworks have a high level of theoretical reference and have been analyzed and included in numerous books, journals and anthologies. Ostojić studied sculpture at the University of the Arts Belgrade, Serbia (B.A 1995, MA 1998), visual arts at the École Regionale des Beaux-Arts Nantes, France (1998-99) and received Albert Einstein Research Fellowship for Interdisciplinary Research at the Graduate School for the Arts and Sciences at the Berlin’s University of the Arts (2012-14).